Care for the Wild was involved with organising, supporting and speaking at several badger cull protest marches during 2013. Here are some of the highlights!

We’ll be continuing to mobilise our friendly but determined #badgerarmy until the culling is stopped for good. See our Badger Cull Protests page for details of upcoming badger cull protests and badger cull marches, plus other ways you can take action.

BadgerArmy Tell Gloucestershire – We’re With You!

Following the announcement that there will be culling again this year in Somerset and Gloucestershire, the scene was set for a big protest in Gloucester. And it didn’t disappoint!

The message is clear

Our Badger Army has marched all around the country

TB or Not TB, That is the Question! BadgerArmy heads to Stratford Upon Avon

Dominic Dyer at the Stratford march

Another great event, with Bill Oddie and MPs (from both key parties) speaking against the cull.

BIll Oddie speaks against the cull

Are you listening Parliament?

More on the badger cull Parliament debate from the Daily Mail

Biggest #BadgerArmy Ever? 1000 March in Birmingham

Around 1000 people took part in a wonderful anti-badger cull event in Birmingham, organised by local wildlife campaigner Julie Buxton. Stalls, music plus speeches and a friendly but vocal march made it very clear that the #badgerarmy is not going away!

1000 march against the cull in Birmingham

Care for the Wild’s Cure Not Kill stand

On the march in Birmingham

Best of British march against the cull

Care for the Wild’s Nigel at the Birmingham march

Read the story in the Birmingham Mail

Shrewsbury Shows Owen Paterson What It Thinks of the Cull!

The peaceful #badgerarmy marched to Owen Paterson’s home county for the first protest of 2014. A great turn out of around 500 beat the weather in a protest organised by local mum Diane Bartlett. Speakers alongside Dominic Dyer included Jim Ashley from the Shropshire Badger Group and Tosca Cabello-Watson from Gloucestershire Against Badger Shooting. 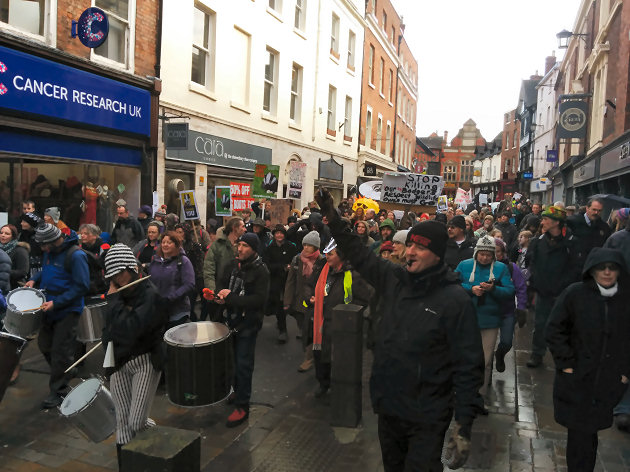 More videos of the Shrewsbury Badger Cull protest from Shropshirelive.com

Leeds leads the Way with a Peaceful Badger Cull Protest!

Protesters at the anti-badger cull march in Leeds

Best yet – Bristol attracted around 1000 ‘Badger Army’ members to a march which, coincidentally, started at the exact time that the cull in Gloucester was called to a halt.So there was an air of celebration – while at the same time knowing that the battle will continue in the new year.

Among the speakers were TV wildlife experts Bill Oddie and Simon King, as well as Dominic Dyer.

Around 700 people protested against the cull in Brighton on Sunday 3rd November, including TV kids’ favourites Bodger and Badger. Dominic Dyer delivered another stirring speech before we hit the streets through a busy – and friendly – town centre.

The legendary Bodger and Badger joined our anti-badger cull campaign

We visited David Cameron’s constituency of Witney on Saturday when another committed local group organised a peaceful protest. Read about how it went here.

1000 March Against the Badger Cull in Manchester!

Around 1000 anti-cull protesters marched in Manchester on Sunday 29th September, as part of a mass TUC protest. Amazing turnout, and the message was loud and clear. Take a look at our Dominic Dyer raising the roof with his pre-march speech:

The Somerset Badger Patrols hosted an event in Taunton on the 7th September. It was a peaceful event similar to the London March to show the strength of public feeling against the shooting of badgers in Somerset and Gloucestershire with a turn out of around 400 people in the pouring rain.

There was lots of media there and Care for the Wild’s Dominic Dyer did a rallying speech to the crowds. You can read more here on ITV News or watch Dominic’s full speech below.

Pictures from the Protest

A peaceful vigil took place in Bedford, organised by Care for the Wild and Bedford Badger Trust group. Around 100 people braved the rain to take part and listen to Care for the Wild’s Dominic Dyer, who said afterwards:

“To have a hundred plus people brave the rain to come out in Bedford and protest against the badger cull was amazing. They came from all walks of life, all ages, and represent the way many people in this country feel about the slaughter of an iconic animal without any scientific justification.

“Bedford isn’t even in the cull zone, but if the government rolls out this barbaric policy to other counties next year, who knows when it’ll be happening on your doorstep. The time to protest is now, before it’s too late for the badgers.”

Another great turn-out. Read this story and watch the video from the Northants Telegraph.

London March against the badger cull

We supported the Central London National March Against the Badger Cull and we’re joined by over 5000 protesters from around the country, united in our call to stop the cull and Cure Not Kill. It was a great day and the message was clear – the public do not want this pointless and cruel cull. Our thanks to the march organisers, London Against the Badger Cull, and all of our friends at Team Badger.

Care for the Wild featured in a lot of the media coverage around the march, including this quote from our CEO:

The badger cull has no scientific, economic or animal welfare justification.The Government and the NFU are blindly embarking on one of the worst agricultural policies of the past 30 years, which will lead to senseless slaughter, chaos and disruption in the countryside, huge cost to the taxpayer and no meaningful reduction in the spread of bovine TB.

Here’s just some of the pictures from the day.

A report from Sky News on the march can be seen here.